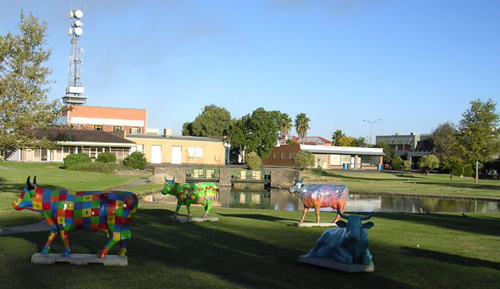 Shepparton is a city located on the floodplain of the Goulburn River in the north east of Victoria, Australia, approximately 181 kilometres (112 mi) north-east of Melbourne. According to the 2011 Census, the population of the locality was 29,553, while the population of the entire Shepparton-Mooroopna urban centre was 42,741.

Shepparton has a semi-arid (Köppen climate classification BSfk) climate, with hot summers and cold winters. The hottest summer month is January, when the average temperature reaches 31.7 degrees Celsius. In winter, the weather becomes coldest in July when the minimum averages 3.2 and the maximum gets to 13.2 degrees.

Although the rainfall in Shepparton is fairly sparse, winter sees the most rain days. The rain doesn't get too heavy throughout the year. Even with the wettest month being in November, the rainfall still averages at 53.2mm. The weather is driest at the beginning of Autumn with the rainfall averaging at 17.2mm, although the month with the least rainiest days in January.

Shepparton's main industries are agriculture and associated manufacturing. Australia's largest processor of canned fruits, SPC Ardmona, a wholly owned subsidiary of Coca-Cola Amatil, has production facilities in Shepparton and nearby Kyabram. Seasonal fruits, such as peaches, pears and apricots are preserved into a variety of packaging. The Manufacturing industry has evolved to cater for the needs of local primary producers.

Shepparton has Victoria's second largest Aboriginal community after Melbourne, making up approximately 10% of the city's population. The concentration of Indigenous Australians is the largest of any Victorian city and is 4 times the national average (2.5%). Shepparton has a large immigrant community, with people from places such as India, Albania, Afghanistan, Iraq, Greece, Italy, Sudan and Macedonia as well as many other places.

The University of Melbourne's School of Rural Health and Rural Clinical School of the Faculty of Medicine, Dentistry and Health Sciences are also based in Shepparton.

Goulburn Ovens Institute of TAFE has two campuses, one in Fryers Street which hosts the organisation's administration department as well as many teaching departments, and the William Orr Campus, a 120 hectare property in Wanganui Road.

The city is located at the junction of the Midland Highway and the Goulburn Valley Highway, the latter which is being progressively converted to freeway standard. The Peter Ross-Edwards Causeway connects Shepparton to Mooroopna.

Shepparton Airport, located south of the city on the Goulburn Valley Highway and is home to Gawne Aviation. Shepparton also has buses that run around the suburbs and Mooroopna